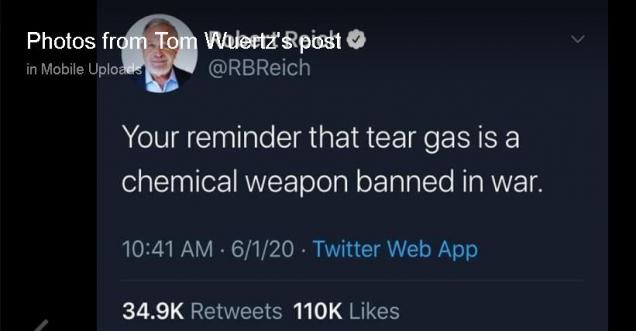 Your reminder that tear gas is a chemical weapon banned in war.

Despite its ubiquity across the globe and in the United States, tear gas is a chemical agent banned in warfare per the Chemical Weapons Convention of 1993, which set forth agreements signed by nearly every nation in the world — including the United States.

After the death of George Floyd, the Nation has been burning and police have taken all measures to stop the rioters are damaging and causing any loss of lives, to stop these police forces did not hesitate to use Tear Gas, to disperse the crowd.

Certain lachrymatory agents, most notably tear gas, are often used by police to force compliance. In some countries (e.g., Finland, Australia, and the United States), another common substance is mace. The self-defense weapon form of mace is based on pepper spray which comes in small spray cans. Versions including CS are manufactured for police use. Xylyl bromide, CN, and CS are the oldest of these agents. CS is the most widely used. CN has the most recorded toxicity.

Typical manufacturer warnings on tear gas cartridges state "Danger: Do not fire directly at the person(s). Severe injury or death may result." Such warnings are not necessarily respected, and in some countries, disrespecting these warnings is routine. Tear gas guns do not have a manual setting to adjust the range of fire. The only way to adjust the projectile's range is to aim towards the ground at the correct angle. The incorrect aim will send the capsules away from the targets, causing risk for non-targets instead.🤬🤬🤬

Vinegar, petroleum jelly, milk, and lemon juice solutions have also been used by activists. It is unclear how effective these remedies are. In particular, vinegar itself can burn the eyes and prolonged inhalation can also irritate the airways. Though vegetable oil and vinegar have also been reported as helping relieve burning caused by pepper spray.

Kräuter suggests the usage of baking soda, (not vinegar because it is also an acid), or toothpaste, stating that they trap the particles emanating from the gas near the airways that are more feasible to inhale. A small trial of baby shampoo for washing out the eyes did not show any benefit.

As per CDC, Riot control agents (sometimes referred to as “tear gas”) are chemical compounds that temporarily make people unable to function by causing irritation to the eyes, mouth, throat, lungs, and skin.

Where riot control agents are found and how they are used

Riot control agents are used by law enforcement officials for crowd control and by individuals and the general public for personal protection (for example, pepper spray).

VERDICT:  Partially banned, tear gas is banned for use in war. yet, the same international provisions that ban it also allow law enforcement to use it domestically.